The Director General , National Broadcasting Commission Balarabe Shehu Illelah has expressed deep satisfaction with the adequate provisions made by the NYSC towards the commencement of radio transmission as soon as Broadcasting license is approved.

The NBC boss commended the present NYSC Management for procuring standard Radio equipment and building a digital studio preparatory to a preliminary inspection which confirmed their commitment to publicising the activities of the Scheme especially through mainstream Broadcast media.

Mr Illela was speaking today while assessing the Studio facilities Installed at the proposed ‘NYSC Radio’ complex located at the NYSC Directorate Headquarters, Maitama- Abuja. He said with the standard facilities he had seen, NYSC is on the right track towards obtaining a broadcast license after a thorough screening procedure.

While taking the NBC DG round the studio, the NYSC Director General Major General Shu’aibu Ibrahim disclosed that the proposed NYSC Radio was initiated to reach out to the grassroots and make the Scheme more visible in its drive at promoting national integration, self reliance and socio-economic development. He said the Radio will compliment other multimedia channels deployed in informing the public all the invaluable contributions of corps members to national development. 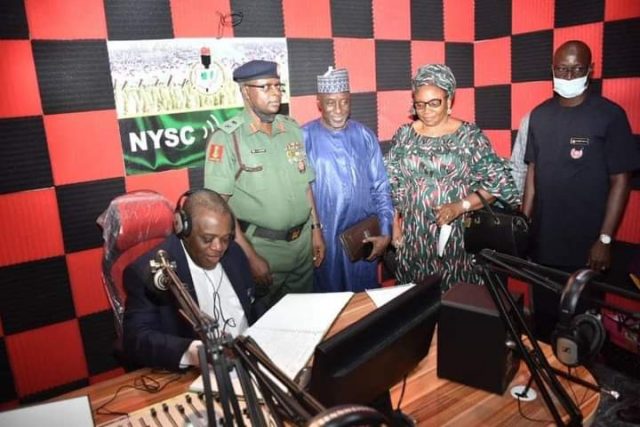 While reacting to the observations made by his Guest, the NYSC Director General, Maj General Shuaibu Ibrahim assured the NBC that all arrangements have been made to start Broadcasting as soon as licence is granted through the commission. He said NYSC has competent personnel to operate optimally considering its multidisciplinary graduate manpower across the federation.

Before leaving NYSC Headquarters, the Director General NBC was taken round the resourceful NYSC Museum where he inspected historical artefacts and documented information on the evolution of the Scheme , its activities, interventions and contributions to national development agenda over the years.