Anthony Joshua promised to ‘reconstruct the face and body’ of Jarrell Miller as the heavyweight rivals enjoyed another foul-mouthed, fiery press conference on Monday.

The two fighters meet at Madison Square Garden in New York on June 1, with AJ putting his IBF, WBA and WBO titles on the line on his US debut.

‘There’s not much I can do to that face… but I’m going to reconstruct his face and I’m looking forward to the challenge,’ an angry Joshua said.

‘Look at his face, I am going to reconstruct his face on June 1. I do the job, I am a good boxer, heavy handed puncher and beaten better opponents than anyone else out there.

‘Landlord in the States, I am going to be your surgeon in the UK. You are going to have a makeover.’

Miller was unfazed, mocking his rival by snoozing during AJ’s comments and vowing: ‘The gameplan is to stop his behind in seven rounds’. 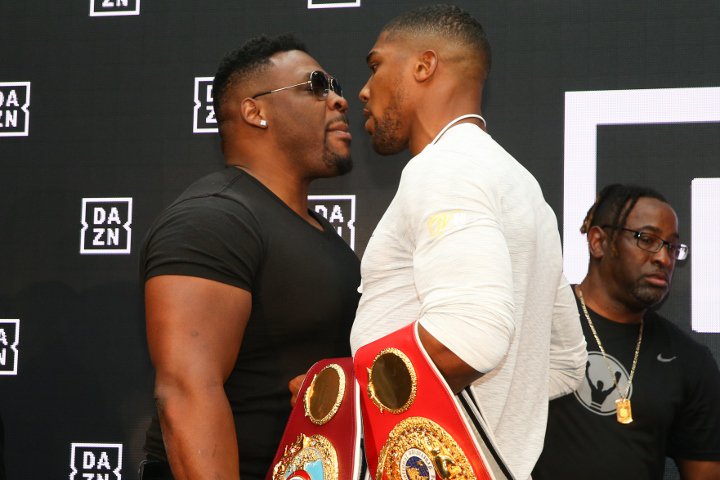 He continued: ‘I am ready for anything, the fans cant fight for him. This is what I’ve been doing, where I came from.

‘He comes to New York, we’ve got to fight. He’s a sucker, I can freestyle right now. He can’t beat me no matter what he does. I’m a handsome brother, I know what I can do. All the cows he’s been eating, this beef right here he should get ready for.’

There was no pushing and shoving this time around, but the tension remained ahead of their clash in New York on June 1.

The pair went chest to chest for the cameras once more, with security pulling the pair apart before tensions could boil over.

Earlier Miller tried to goad his opponent by claiming: ‘I’ve been hearing AJ’s too posh, his nose is up here sometimes. For all the underdogs out there who are told they’re not good enough; I’m proof that with one or two cheeseburgers and hard work and dedication you can go far.’

Joshua once again hit back at claims that he has had opportunities put on a plate for him during his career.

‘I got banned from the area I was growing up in because I was getting into too much trouble,’ he said.

‘The state of my hands – this isn’t from boxing, this is from street fighting. I’ve changed my whole lifestyle around.

There was more cordiality between the fighters’ respective teams, with AJ’s trainer Rob McCraken insisting his fighter would need to adjust to deal with Miller.

‘(He’s a) great challenger, great fight this will be, but Anthony will be ready and he will deliver,’ McCracken said.

‘(Miller) is good – he can box and fight but Anthony will adjust.’