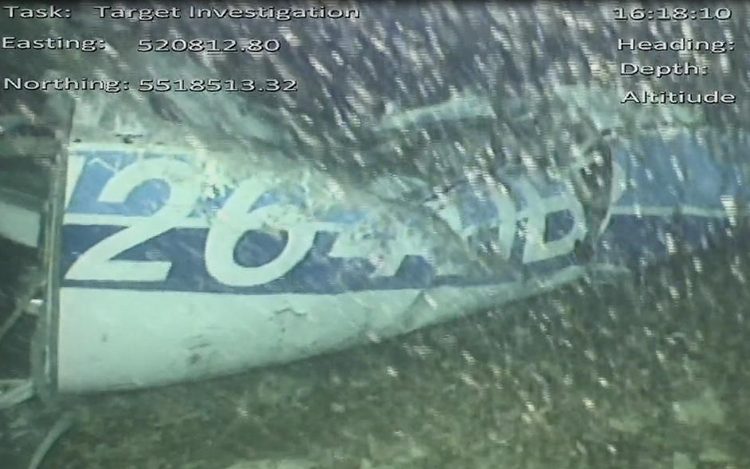 THE BODY of missing Cardiff City footballer Emiliano Sala has been found onboard the wreckage of the plane discovered at the bottom of the seabed.

The Air Accidents Investigation Branch (AAIB) said footage shows one occupant visible in the crashed plane who they believe to be the missing football player. The plane debris was found yesterday evening following an underwater search. Emiliano Sala and pilot David Ibbotson went missing while flying over the English channel on January 21.

Emiliano Sala’s body has been found on the wreckage of the plane (Image: EXPRESS)

The pair were flying from Nantes, France, to Cardiff.

In a statement, the AAIB said:

“Tragically, in video footage from the ROV, one occupant is visible amidst the wreckage.”The AAIB is now considering the next steps, in consultation with the families of the pilot and passenger, and the police.

“The image shows the rear left side of the fuselage including part of the aircraft registration.

“We intend to publish an interim report within one month of the accident occurring.”

An official search operation for the plane was called off on January 24 but a privately funded search began yesterday morning.

David Mearns, who led a privately-funded search for the aircraft, confirmed the plane was found on the seabed last night.

Speaking on the BBC’s Today programme this morning, Mr Mearns said: “We located the wreckage of the plane on the seabed at a depth of about 63m within the first couple of hours of searching.”

The plane is believed to have been found virtually intact, a statement from the AAIB said: “The ROV carried out a further search of the area overnight, but did not identify any additional pieces of wreckage.”

The first breakthrough in the search for the plane came on January 31 when cushions believed to be from the plane were found on a beach near Surtainville, on France’s Cotentin Peninsula.

The initial debris was found more than a week after the plane went missing.

The promising footballer and his pilot were making the crossing after Sala signed for Cardiff City for a club record fee of £15million on January 19.

He said: “I’ve been in football management now for 40 years and it’s by far the most difficult week in my career by an absolute mile.”

Opening up about how the tragedy had affected him, he said: “From a personal point of view I’ve never experienced anything like it.

“It’s been amazing with the knock-on with the players in training.

“Things like this just don’t happen – or you don’t think they happen.”

Why is the Yemeni rebel attack on Abu Dhabi a game changer?

I Did Not Lie To Parliament On No 10 Party-: Boris Johnson Says