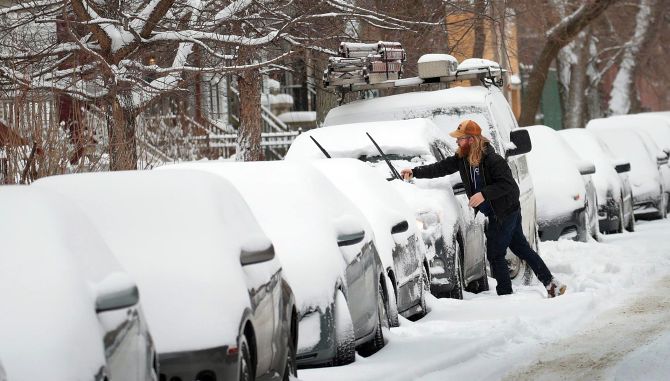 The National Weather Service is warning that accumulated snow and frozen roadways throughout the eastern and southern US may leave roadways too dangerous to drive on.

The extreme weather has caused schools across the country to shut down for at least part of the week. And more than 3,480 US flights have been canceled through Wednesday, according to Flightaware.com.

Chicago is one of the cities in the epicenter of the extreme cold.

The river winding through downtown Chicago has already frozen over. It could remain below zero in the city from around noon on Tuesday until around midday on Friday.

Lows in the Windy City are expected to approach a record of 27 below zero. The daytime high on Wednesday could reach 15 below.

On Sunday, Chicago police officers formed a “human chain” to save a man who fell into the freezing Lake Michigan trying to save his dog, according to CNN affiliate WLS.

The five officers grabbed onto each other’s belts and pulled the 33-year-old man from the water, WLS reported. His dog also was rescued, the news station reported.

“We didn’t talk about it, we just kind of did it,” Chicago Police Department Sgt. Alex Silva said at a Monday news conference, according to WLS.

Several states have declared a state of emergency in response to the extreme cold, including Michigan where Gov. Gretchen Whitmer warned residents to limit their time outside and be aware of signs of frostbite and hypothermia.

“Keeping Michiganders safe during this stretch of dangerously cold temperatures is our priority,” Whitmer said in a news release Monday. “Such widespread, extreme conditions have not occurred in Michigan for many years and it is imperative that we are proactive with record-low temperatures being predicted by the National Weather Service.”

“I want to make sure all state assets are available, including Wisconsin National Guard if needed, to help communities across the state and keep people warm and safe,” Evers said on Twitter.

“The winter storm has the potential to affect a large portion of our state,” Ivey said Monday in a news release. “Travel conditions could be negatively impacted Tuesday and Wednesday mornings. Please avoid travel if possible, and be very careful if you do have to get out on the roadways.”

At least two deaths have been attributed to the current cold pattern.

A man in Rochester, Minnesota, was found dead Sunday outside the home where he was staying with a relative.

22-year-old Ali Alfred Gombo didn’t have keys to the home and was unable to enter after being dropped off outside early Sunday morning. The single-digit temperatures that dipped below zero may have played a role in his death, according to Rochester police.

Police in Libertyville, Illinois, said a man was killed Monday morning as a result of the weather.

“The man died after a roadway crash involving a village plow truck and a pedestrian,” police said. The man was pronounced dead at the scene and the plow driver has been placed on paid administrative leave pending the results of an investigation, according to police.