The former Chairman of the National Human Rights Commission (NHRC), Prof. Chidi Odinkalu has berated the Vice-Chancellor of Abia State University, Professor Onyemachi M. Ogbulu, for, according to him, ‘pre-determining cause of death’ of one Marshall Ibeabuchi.

According to eyewitness, the deceased was said to be playing a football match at the University Pavillion when reportedly died.

Reacting, the ABSU Vice-Chancellor, Professor Ogbulu in a statement expresses sadness on the death of the 200-level medical laboratory student.

Ogbulu confirmed that he slumped and died while playing football at the University Pavillion.

He commiserated with the parents of the deceased, members of the immediate family and the entire students of the University on the unfortunate incident.

The Vice-Chancellor urged the students to remain calm as the University Management will leave no stone unturned at investigating the remote and immediate cause of the death to avert future occurrence. {See the attached document below}

His next statement, however, infuriated Prof. Odinkalu, wherein he said:

“Eyewitness report Indicate that the deceased was said to be playing a football match at the university pavilion, where he did a back flip to celebrate their victory, which resulted to hitting his head on the ground.

“He was rushed to the Medical Centre and all efforts done to revive him, proved abortive, as no vital signs could be obtained.

“He was therefore, dead before arrival to the clinic, as stated by the Medical Director.”

Taking to his Twitter handle, @ChidiOdinkalu, on Tuesday, Odinkalu wondered why the Vice-Chancellor will be in a haste to ‘pre-determine the cause of death’ of Ibeabuchi, asking: “How can he be so callous?”

The VC has issued a statement promising investigation, but in which he also pre-determines the cause of death. How can he be so callous? 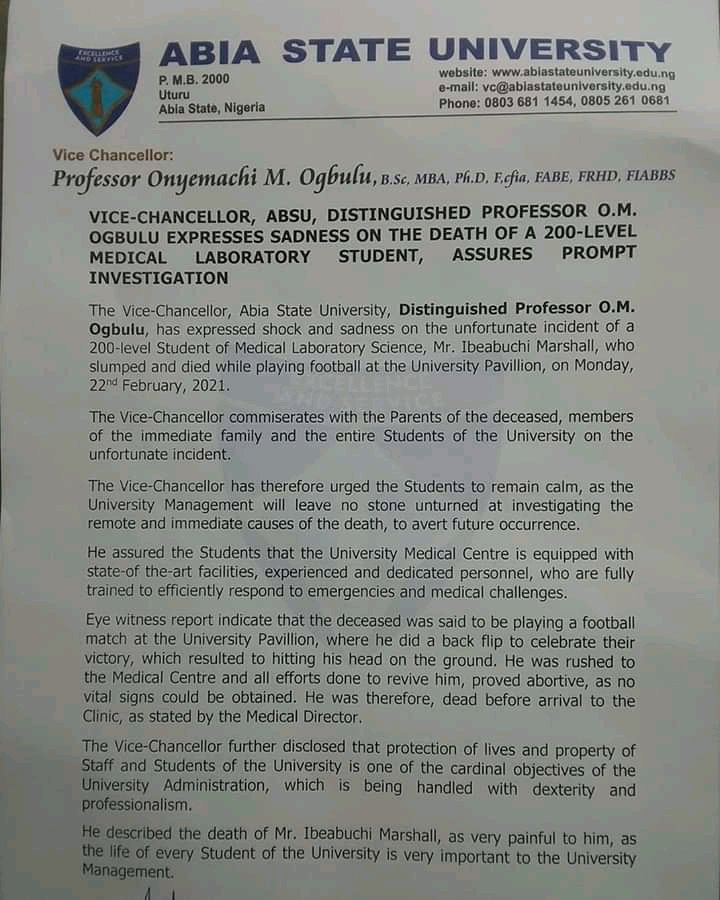 El-Zakzaky: We are ready to sacrifice 21 million members if Buhari govt fails to release our leader – Shi’ites

N10bn spent on food in IDPs within 2 years- FG