15 mass graves and 43 single graves have been found in the Democratic Republic of Congo, where 3 days of ethnic strife last month may have left nearly 900 people dead 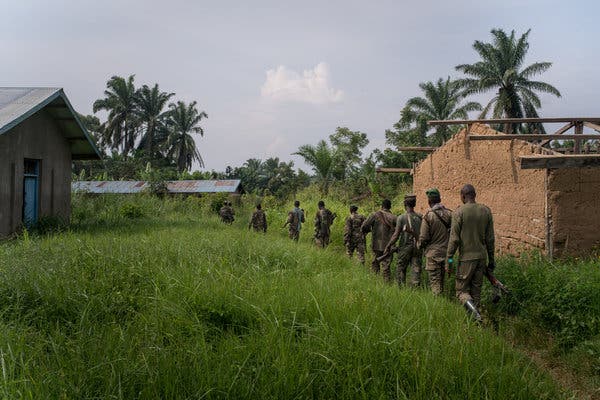 Fifteen communal burial sites and 43 single graves have been found in a northwest area of the Democratic Republic of Congo, where three days of ethnic strife last month may have left nearly 900 people dead, United Nations officials said Tuesday.

The officials said the violence, between the Bununu and Batende groups in and around the town of Yumbi in Mai-Ndombe Province, flared a few weeks before the country’s presidential election on Dec. 30.

There was no indication the violence had been directly related to the election, the officials said. But it came against a backdrop of high political tensions throughout the central African country because the election had been repeatedly delayed by the government of then-President Joseph Kabila, who ruled for 17 years and was reluctant to relinquish power.

The mayhem in the Yumbi area left many homes burned, forced hundreds of residents to flee and destroyed voting machines and other election equipment, which were among the reasons that the authorities in Kinshasa, the capital, excluded the area from participating in the election.

Word of possible massacres around Yumbi first surfaced a few weeks ago, when the United Nations’ human rights office said it had reports from “credible sources” of horrific violence between Dec. 16 and Dec. 18 that had killed 890 people. Michelle Bachelet, the top human rights official at the United Nations, said it was “crucial that this shocking violence be promptly, thoroughly investigated and the perpetrators be brought to justice.”

A fact-finding team sent to Yumbi and the nearby town of Bongende by the United Nations Organization Stabilization Mission in Congo, known as Monusco, found the burial sites, a spokeswoman, Florence Marchal, said Tuesday in a telephone interview.

In Yumbi, she said, “if you walk along the main road you see the graves.”

Ms. Marchal said Monusco had yet to establish an exact death toll. But confirming her remarks quoted in a Reuters report from Kinshasa, she said that “several hundred people, including women and many children, were killed in unbearable circumstances.”

Abdoul Aziz Thioye, the director of the United Nations Joint Human Rights Office in Kinshasa, said the graves had been dug by local Red Cross workers and family members who initially fled the violence and had returned to bury the dead.

“Very often when you talk about mass graves, everyone has in mind people who have been summarily executed and thrown into a hole, which was not the case here,” he said in a telephone interview.

The officials said it was unclear who was responsible for the killings.

Ms. Marchal said the violence appeared to have started over a dispute about the burial of a local chieftain and escalated dramatically. Mr. Thioye said “definitely there was a certain level of organization” in the killings.

They said most residents of Yumbi had fled toward Brazzaville, on the other side of the Congo River in the neighboring Republic of Congo.

Ethnic tensions and deadly flare-ups are not uncommon in the Democratic Republic of Congo, an enormous nation of roughly 81 million that has been chronically convulsed by war and violence.

Although the Banunu and Batende communities have a history of conflict, the area they share is generally considered more stable than the eastern region of the country, which is particularly volatile. An Ebola outbreak in eastern Congo that began in August and killed hundreds has aggravated the problems there.

In a further worrisome sign, the country’s Health Ministry said Tuesday that two soldiers had died from Ebola in the eastern city of Beni, in North Kivu Province, where pre-election rioting caused major damage to an Ebola treatment center.

It was not immediately clear whether the soldiers were the first members of the Congolese military to contract the virus or how many other soldiers may be at risk.

Although vaccines have been developed to protect against Ebola, the disease is still fatal to a majority of people who become infected.

According to the most recent data from the World Health Organization, as of Sunday, 405 people were confirmed to have died from Ebola in the eastern Congo outbreak, out of a total of 679 confirmed cases.

Beni and another eastern city, Butembo, were excluded from participating in the presidential vote because of the Ebola outbreak.

The Dec. 30 election, intended to be the country’s first democratic transfer of power in the six decades since independence from Belgium, was riddled with irregularities.

Last week, the country’s Supreme Court validated the result, which gave Félix Tshisekedi, an opposition candidate, the victory. Another opposition figure, Martin Fayulu, who had been considered the favorite, called the result a fraud. He accused Mr. Kabila of secretly collaborating with Mr. Tshisekedi to retain power.