A billionaire, a scandal and what they say about power in America – The Nigerian Insider News Skip to content

A billionaire, a scandal and what they say about power in America 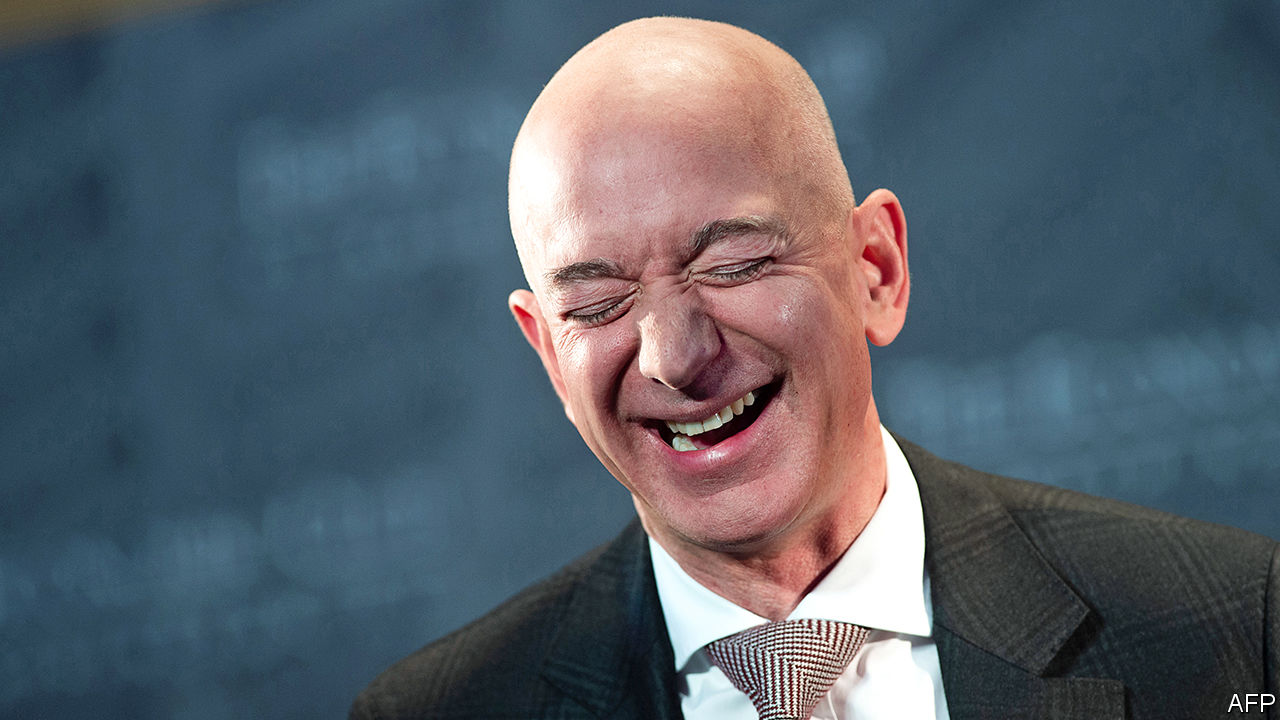 A central curiosity of the contretemps between Amazon’s boss, Jeff Bezos, and David Pecker, who runs the National Enquirer, is that an American scandal sheet sold in supermarkets holds such relevance in 2019. The internet vaporised the old business model of print publications, and social media diminished the news-stand appeal of celebrity gossip. A close examination of Bezos v Pecker suggests that it represents a last hurrah of the American tabloid, as well as a victory of sorts for the Amazon founder. But the affair also holds worrying lessons about how tangled and concentrated—and thus manipulable—power has become in the 21st century.

The saga has played out mostly online. On January 9th Mr Bezos announced on Twitter that he and his wife, MacKenzie, had agreed to divorce. Hours later the Enquirer said it would publish an exposé of Mr Bezos’s extramarital affair; that 12-page report, including photographs and intimate texts, hit the aisles days later. On February 7th Mr Bezos turned to another online platform, Medium, to allege that the publisher of the Enquirer, American Media llc, was blackmailing him.

Under the headline “No thank you, Mr Pecker”, Mr Bezos wrote that American Media executives threatened to publish more revealing photos of him and his paramour unless he agreed to declare publicly that their pursuit of the story about his affair was not motivated by politics or any other “external forces”.

Instead the Amazon boss thickened the plot. He piled emphasis on politics and external forces, noting Mr Pecker’s business ties to the kingdom of Saudi Arabia, whose regime is accused of murdering Jamal Khashoggi, a columnist for the Washington Post, which Mr Bezos owns. (In 2018 Mr Pecker reportedly sought backing from Saudi investors to bid for Timemagazine, and American Media also published a glossy propaganda magazine extolling Muhammad bin Salman, the crown prince).

Mr Bezos also referred to Mr Pecker’s friendship with President Donald Trump, who has relished attacking Mr Bezos, Amazon and the Post on Twitter. Mr Bezos suggested that his paper’s coverage of both the Khashoggi murder and of Mr Trump have made “certain powerful people” conclude he is their enemy. He hinted at the possibility that there were other motives behind the Enquirer’s coverage, including Mr Trump’s animus towards him. After all, during the 2016 presidential campaign the Enquirer endorsed Mr Pecker’s old friend, the first time it had ever backed a candidate. Mr Trump tweeted in mock sympathy for “Jeff Bozo” after the Enquirer published its account of the extramarital affair.

It will take time for investigators to untangle precisely who did what and why, and whether blackmail or other crimes were committed. To be sure, the Enquirer would have needed no encouragement from either Mr Trump or the Saudis to go after what is classic tabloid fare—exposing, as it were, the world’s richest man, whose personal style has lately morphed from tech geek to muscle-ripped socialite.

The stakes for Mr Pecker and his company are particularly high. In 2018 American Media had entered into an immunity deal in connection with the successful prosecution of Michael Cohen, Mr Trump’s former lawyer, in which Mr Pecker admitted to buying negative stories about Mr Trump in order to bury them, a practice known as “catch and kill”. Federal prosecutors in New York’s southern district are reportedly examining whether the company violated the terms of that immunity deal, which includes a promise not to commit any crimes for at least three years.

On February 10th an attorney for Mr Pecker told abc News that the company did nothing illegal, that the Enquirer merely reported on Mr Bezos’s extramarital affair, and then conducted negotiations in which both sides wanted something. A lawyer experienced in tabloid litigation says that the case presents a murky legal question, in part because it is so unusual: “Normally, someone says, ‘Pay me money, or I will publish photos.’ This is a bit of a different situation.” Under federal law, a threat can count as extortion if it seeks to extract something “of value”, but prosecutors tend to be wary of pursuing media companies.

Beyond its legal implications, the story casts light on three shifts in the nature of power in modern business and politics. The first is about its fragility when digital privacy is increasingly at risk—even that of billionaires who spend heavily on physical security. In tabloid high jinks of yesteryear, a private eye might hope to get a snapshot outside a celebrity’s bungalow, but he or she could hardly hope to get a “dick pic”.

In the event Mr Bezos was able to stare down Mr Pecker, his alleged antagonist. But others in powerful positions might feel more vulnerable. There may be many cases of successful digital blackmail of powerful figures, including in the tech industry, that the public might never learn about. “I could name ten right now, people successfully extorted or very close to it,” says Blair Berk, a criminal lawyer in Hollywood. “I represent folks who are targeted specifically because they are more vulnerable to having reputations ruined.”

The second lesson compounds the worries presented by the first: that power is increasingly concentrated in the hands of a few global titans. Mr Bezos is a prime example, with his control of a tech platform that has become a formidable player everywhere it operates, and which, via Amazon Web Services, has about a third of the cloud market for business. Even American Media appears to be an Amazon cloud customer.

Critics of Mr Trump have fretted that he could be unduly influenced by Russia or Saudi Arabia, where his family has had business dealings, or that he could be the victim of “kompromat” held by Vladimir Putin. But the concentration of technological and market power threatens to turn people like Mr Bezos and Mark Zuckerberg of Facebook into potential single points of vulnerability that could be as worrying. A successful blackmail of Mr Bezos in a decade, when, say, Amazon’s Alexa-controlled devices are widespread, would give the blackmailer a powerful platform.

A third change is that any scurrilous sort on the internet can become a digital tabloid unto themselves. Ms Berk says that celebrities have more to worry about from “the immediate power and terror of an Instagram post” than from prying tabloids. “Tabloids no longer have the power.”

Indeed the media group that allegedly held the power in this affair, the Enquirer, would seem all but crumbling. Its print circulation has fallen from 6m in 1978 to 218,000, according to the Alliance for Audited Media. American Media owns other titles, such as ok! and Star, that are also in decline. And the operation is heavily indebted. In January American Media managed to raise $460m to refinance its debts. But the Enquirer may be in a precarious financial position as it spars with Mr Bezos.

As for Amazon, the personal troubles of its boss have not translated into reputational damage for the firm, although Mr Bezos admitted that his ownership of the Post is a “complexifier”. Shareholders are interested in what his impending divorce will mean for his 16% stake, which could fall by half. But they strongly back his leadership of Amazon, which has continued outperforming the stockmarket and its peers (see chart). Its shares have barely budged since news of the divorce.

If his battle with American Media escalates in an unfavourable way for Mr Bezos, he could become more of a target, and a complexifier for his own company. Amazon frequently bids for government contracts, including with the Pentagon. It is opening new corporate campuses in New York City and in northern Virginia whose success in part depend on public sentiment (see box on previous page). Yet for now, one senior Wall Street figure reckons Mr Bezos has shown where the true power lies, making Amazon stronger still. “Jeff’s willingness to put it all out there shows he is not blackmail-able…this guy’s a total badass, you can’t get him.”